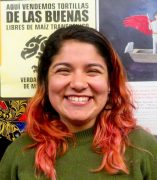 Eliana Buenrostro is a Southern California native and an alumnus of UCLA. She received her BA in Gender Studies and Chicana/o Studies in 2015. As an undergraduate student, she was heavily involved in student activism and organizing including the fight for University of California union workers to be paid a fair and living wage. In 2015, Eliana conducted field research in San Cristóbal de las Casas, Chiapas on gender violence and worked with survivors of domestic violence. She also has experience working in rape crisis in Chicago as a former community educator and medical advocate for survivors of sexual assault.