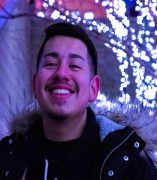 Johnathon Castro is a first-generation college student, born and raised in the Northwest Side of Chicago. In May 2019, he graduated from the University of Illinois at Chicago Cum Laude with highest departmental distinction with a Bachelor of Arts in Latin American and Latino Studies. During his undergraduate studies he had the privilege of interning with the Illinois Coalition for Immigrant and Refugee Rights, an internship set up by the LALS department. During his time interning  he helped organize the Campaign for Welcoming Illinois to pass three important bills for the immigrant community, including the RISE Act. My senior thesis centered around the Guatemalan civil war and how it affected migration patterns of indigenous populations to the United States. As a M.A student at UIC,  he hopes to explore how U.S. intervention in Latin America has influenced the development of certain countries and some of the patterns we commonly see today.