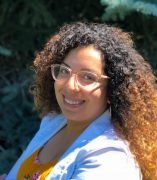 Crystal Galván is from Omak, Washington, a small rural town in North Central Washington. She graduated from Washington State University in May 2017 with a B.A. in Comparative Ethnic Studies and a B.A. in Sociology. Some of her research interests include the African Diaspora in México, Race and Racism in Latin America, and Intersectionality. Crystal presented at the Latin American Studies Association (LASA) 2017 conference in Lima, Perú. In this project, she examined the afro-descendant population in Mexico and popular racialized images in Mexican society. While at UIC, she looks forward to continue learning about Latinx and Latin American communities as well as, being an agent of social change.