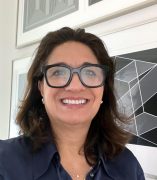 Olga U. Herrera is an art historian, independent curator, and a Visiting Scholar in the Department of Latin American and Latino Studies Program at the University of Illinois at Chicago. She previously served as director of the Inter-University Program for Latino Research (IUPLR) Washington Office and held positions at the University of Notre Dame, and the Smithsonian Institution. While at IUPLR she was the director of the Summer Institute for Latino Public Policy (2005-2013) and was involved in hemispheric and national research humanities initiatives in Latino Studies including the organization of the conference series Siglo XXI and Latino Art Now!

Dr. Herrera is the author of Toward the Preservation of a Heritage: Latin American and Latino Art in the Midwestern United States (ILS, University of Notre Dame, 2008); American Interventions and Modern Art in South America (University Press of Florida, 2017; 2019) winner of the 2018 SECAC Award for Excellence in Scholarly Research and Publication; and editor of Scherezade García: From This Side of the Atlantic (AMA, 2019), and iliana emilia García: The Reason/The Object/The Word (AMA, 2019). She guest co-edited the special issue of the Diálogo on Latin American and Latino Art (spring 2017). Her essays and interviews have appeared in publications of the International Center of the Art of the Americas at the Museum of Fine Arts - Houston, the Archives of American Art Journal, MIT ARTMargins, Diálogo, Public Art Dialogue, Asian Diasporic Visual Cultures of the Americas and others. She holds a Ph.D. in Latin American modern and contemporary art history and theories of globalization from George Mason University.