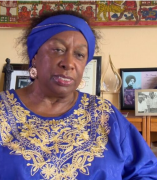 Fannie Theresa Rushing received her Ph.D. in Latin American and Caribbean History from the University of Chicago.

Rushing has lived and studied in Latin America and the Caribbean. During the last twenty years, she made more than ten research trips to Cuba. She has published articles, organized symposia, and lectured on the African Diaspora in Latin America, “race,” and social and political movements. She has just finished an anthology on Black resistance in Cuba, Breaking the Chains Forging the Nation the AfroCuban Fight for Freedom and Equality, 1810-1910, published by Louisiana State University Press.

Currently, she is working on a textbook on the African Diaspora in Latin America.