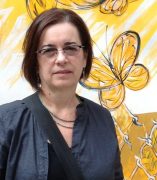 Pronouns: She/ Her/ Hers

Rosa M. Cabrera became the director of the Rafael Cintrón Ortiz Latino Cultural Center at UIC in the spring of 2011. She earned her Doctorate in Anthropology and Bachelors of Arts in Design from UIC. Cabrera has talked extensively on the role of ethnic museums and cultural centers in shaping community identity–which was the topic of her dissertation. Prior to joining UIC, she was at the Field Museum where she led the “Cultural Connections” program, a partnership of more than 25 ethnic museums and cultural centers in Chicago that formed the Chicago Cultural Alliance in 2006 under her leadership. Between 2009-2011, she was part of a research team in a project with nine Chicago neighborhoods to better understand how diverse residents, including Latinxs in Pilsen could be engaged in the Chicago Climate Action Plan.  At UIC she has implemented projects such as the Heritage Garden to help the campus make explicit connections between environmental sustainability, cultural diversity and social justice. She is currently working on the Humanities Action Lab "Climates of Inequality" project, which includes a traveling exhibit that amplifies local stories of environmental justice. The local story of La Villita, developed by UIC students in partnership with Alianza Americas, reveals how environmental injustice, immigration, and policing intersect in this neighborhood.

Cabrera is affiliated faculty with the UIC Department of Anthropology, Latin American and Latino Studies (LALS) Program, the Graduate College, and Museum and Exhibition Studies (MUSE) Program. She is also a Keller Science Action Center Associate at the Field Museum. Her research interests include: the role of museums in civic participation and community identity formation; Latinx identity and citizenship; the intersections of environmental/climate justice and immigration; and the role of the arts to increase public dialogue on pressing social and environmental issues.